Dates for your diary

Details of what's coming up. 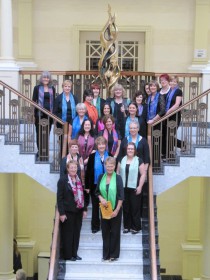 ALL REHEARSALS AT MANX BLIND WELFARE UNLESS STATED OTHERWISE.

Angela has a supply of Black Folders available for sale if anyone requires one.

Jacquie also has the scarves and pin badges if anyone wishes to buy one.

Membership forms will be updated from September as agreed at our recent AGM.